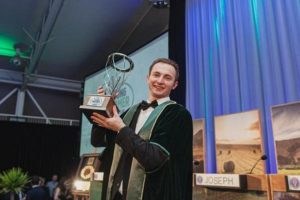 An Auckland-based business graduate has made history after being named the 51st FMG Young Farmer of the Year.

James Robertson took out the coveted title in front of a crowd of almost 700 people in Napier on Saturday 6 July.

There was loud applause and cheering as he made his way through a standing ovation and onto the stage.

The 22-year-old is the youngest contestant ever to win the grand final of the iconic agricultural contest. “When my name was called out I went into shock. I just can’t believe it, it’s a dream come true,” said James. “It’s always been a goal of mine to win this title.”

James grew up on a 200 cow dairy farm in the Waikato and works for Fonterra in its trade strategy team.

He’s proof you don’t have to milk cows to have a career in New Zealand’s multi-billion dollar dairy sector.

“The opportunities in the agri-food sector are endless, even if you live in the city. You just have to be passionate,” he said.

James was one of seven contestants from across the country who competed in this year’s grand final. The victory was the culmination of days of gruelling practical and technical challenges which tested their skills, knowledge and stamina. Competitors had to drive a large grape harvester, make sausages, assess health and safety risks using a virtual reality simulator, install an irrigation system for fruit trees, market a line of sheep and sit an agri-business exam.

James won a prize package worth at least $75,000, which includes a trip to Ireland. He also took out the FMG People’s Choice Award, winning $1,000 for his Auckland Young Farmers club.

Despite his young age, James has had a long involvement with NZ Young Farmers which started during high school. In 2013, James and a fellow team mate from Hamilton Boys’ High School won the TeenAg Grand Final. It means the Massey University graduate is the only person to take out both grand finals.

“The work NZ Young Farmers does in schools to show students the diverse range of careers in agriculture is extremely important,” he said. “I probably wouldn’t be in this position if it wasn’t for my involvement with NZ Young Farmers early on.”
Central Hawke’s Bay technical field representative Joseph Watts, 28, took out second place in the grand final. He also won the innovation prize, the award for showcasing food production and was named the most tech-savvy contestant.

The total grand final prize pool is worth $100,000. The FMG Young Farmer of the Year is an iconic contest which began in 1969 and showcases the country’s agri-food sector.