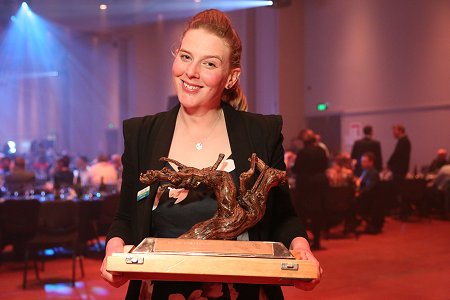 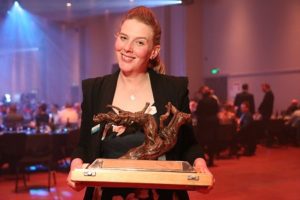 Congratulations to Annabel Bulk who has become the Bayer Young Viticulturist of the Year 2018. Ms Bulk was representing Central Otago and is Assistant Viticulturist at Felton Road.

She is thrilled to have won this prestigious title and delighted that all her hard work over the last few years has paid off. She is very passionate about viticulture and has proved she has the skills and knowledge to become one of the New Zealand wine industry’s future leaders. Ms Bulk is delighted she will be taking the trophy back to Central Otago. This is only the second time it has been won by someone in this region – Nick Paulin won the competition in 2011.

Ms Bulk is also the first woman to win the competition since Emma Taylor took the title in 2007. “It is encouraging to see that more women have entered the competition around the regions this year and it is a great achievement for Annabel to take out the overall title as she excelled in both practical and theoretical sections” says Nicky Grandorge, National Co-Ordinator. “Viticulture is certainly an exciting and varied career for both men and women.”

Congratulations also goes to Scott Lanceley from Foley Family Wines in Wairarapa who was Runner Up. He also showed a wide range of knowledge and skills across all the sections and again with good leadership qualities.

Congratulations also to Jake Dromgool from The Landing in Kerikeri who came third. He was the first ever national finalist from Northland and was very proud to draw attention to the wines of his home region. He has also recently released his own label, 144 Islands, another great achievement for this young vit.

Comments from sponsors and judges were that the calibre of the finalists seemed to have jumped another level again this year as all contestants shone in their knowledge and professionalism. The other finalists who gave Ms Bulk some serious competition were Jono Hunt from Delegat’s Hawke’s Bay, Ben Richards from Indevin in Marlborough and Zoe Marychurch from North Canterbury.

The finalists’ speeches all had a big impact at the Bragato Conference where they spoke about challenges specific to the wine industry in their own region. Prior to the competition they also had three weeks to write a report on under vine weed management. The judges were highly impressed with their research and this information will be shared at a later date.

The competition itself was held at Palliser in Martinborough on Monday 27th August, where the contestants competed in the BioStart Hortisports race as well as undertaking a wide range of practical and theoretical challenges. The winner announced at the Bragato Dinner in Wellington on 30th August.

Ms Bulk takes home a fantastic prize package which includes a Hyundai Kona for a year, $5000 AGMARDT Travel Grant, $2000 cash, Bahco golden secateurs, glassware and a leadership week where the winner travels around New Zealand to meet influential people from the within the wine industry as well as leaders from other industries.

She will also go on to represent the wine industry in the Young Horticulturist of the Year competition in November.

Ms Grandorge says “It has been another fantastic competition this year and the enthusiasm and energy around it as well as the growing young vit community gives the New Zealand Wine Industry a strong platform to continue progressing well into the future.” 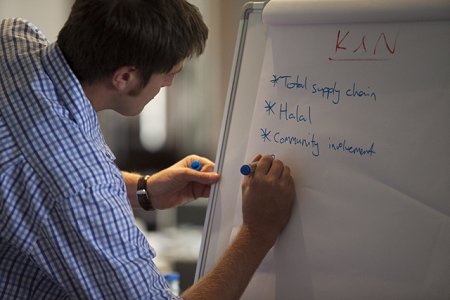 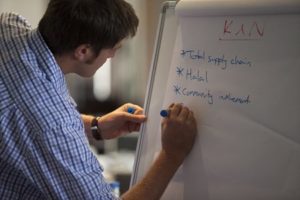 AbacusBio and AGMARDT are offering an exciting new 6-month internship programme with two openings available for the 2018/19 intake.

The internship is intended for people employed in the agri-tech, agri-business, and/or agri-food sectors, who have clear career goals in mind. Interns will gain international exposure to agri-business, agri-food, and agri-tech sectors. The internship programme will be focused on developing core and transferrable skills that can be practically applied in their role. These skills are intended to help interns progress from their current roles into higher positions as the industry’s future decision-makers. Each intern will be assigned a mentor.

Part 1: The first 6 weeks of the programme will comprise a mix of workshops and project work conducted internally at AbacusBio.

Part 2: When based in the UK, interns will work on one or more projects in areas of interest to the intern and their employers. These projects are intended to be beyond business as usual (and hence not achievable in the employee’s current role) and are expected to provide the intern with the scope to consider new opportunities and challenges.