Thoughtful Viticulture is on a mission to reduce the water footprint of New Zealand’s $2 billion viticulture industry and build a sustainable and climate change resilient future for the industry.

“We are blessed in New Zealand with our free water,” says founding Director of the viticultural consultancy Mark Krasnow, who hails from California where the industry deals with increasing drought intensity. 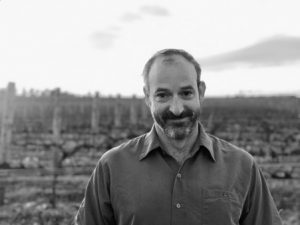 To stay competitive the industry can’t greatly reduce yield, says Mark. One option is building more storage dams for water, but these are expensive and occupy land area.

“What the industry needs are new rootstocks that can function in drier conditions, allowing vines to ripen fruit with less, or ideally no, water inputs.”

With funding support from AGMARDT, Thoughtful Viticulture is assessing various rootstocks under water limited conditions to determine which are most suitable for ripening a full crop with less water.

With previous AGMARDT funding, Thoughtful Viticulture has already assessed two New Zealand – Riparia Gloire and 3309, which differ in their response to drying soil, but both are considered ‘drought intolerant’.

And currently, the industry is relying heavily on 3309 with mass replanting of vines across the industry replacing those put in during the boom of the 2000s.

“More than 90 percent of vines in New Zealand, regardless of variety, are now being planted on 3309 rootstocks, which does not tolerate drought particularly well.

“As we move into a future with less water availability, this ‘underground monoculture’ could put the viability of the industry at risk not only due to water issues but as a biosecurity risk.

“It is very likely there are better rootstocks in New Zealand for farming with less water, and that can keep functioning at lower water status than these two. Our new study is assessing some of these, so that more informed planting decisions can be made with an eye towards a more water-limited future.”

Mark is also collaborating with a Viticulture Professor at Cal Poly in California, sharing data on different rootstocks.

“The data we’re gathering will be shared with the New Zealand nursery industry to graft vines onto the optimum rootstock, as well as for the wine industry to make more informed rootstock choices for vineyards in a more water limited future.”

Another driver for the project is building the eco-credentials of New Zealand’s viticultural industry in increasingly discerning export markets.

“Expectations are changing in our export markets, especially with supermarkets, which are starting to ask about how much water is being used to make wine.

“Reducing how much we need to irrigate our vines shrinks our water footprint, boosting our eco-credentials and giving the industry social licence to operate into the future.

“Ultimately this research is vital for the industry moving forward and we’re extremely grateful to AGMARDT’s support as a future-focused funder.”